The core of the Think Winning Thoughts program is built on beliefs so most of what I’ll say in this short post will be full of very broad brush stroke statements. When you understand how powerful beliefs are and how many layers to them there really are (I encourage you to) begin to question everything you tell yourself!

BELIEVE IT AND SEE IT

A belief is a feeling of certainty about something; a thought you’ve repeated enough times until it becomes a “truth” for you.  Information type beliefs are developed when you’ve gathered details about a subject, analyzed it, concluded “good” or “bad” and then made that your belief. Think things like your chosen political party or your favorite brand of golf clubs.  Experience beliefs are those based on exactly that, “experiences” we’ve had…as in, how much vodka is too much vodka to drink on an empty stomach.

Beliefs affect how you represent what is going on in the world to yourself. They act like a “screener” of incoming data.  There is so much coming to you at any moment in time that for the brain to be able to process it all, it distorts, generalizes and deletes things that don’t match its internal programming.  It’s because of this that you tend to see the world not as it is, and yet as you filter it!  Using the political party example again, once you’ve made your mind up – literally – about one party or another then everything they do will only make you “see” you’re right.

When it comes to your golf game you have beliefs about your ability.  How beliefs get programmed is an entire section in the manual so here is the short version: any thought that you continually tell yourself reinforces that thought until your subconscious mind accepts it as true for you, then it operates based on that accordingly.  People make fun of affirmations all the time and yet when it comes to negativity, the shit you give yourself during your game or practice is the exact same process – say it enough times and it becomes your self-fulfilling prophecy.  The reason why some (positive) affirmations don’t come true is because other (negative) ones do.

The area’s where you’re confident in your play is where you have beliefs that serve you.  Do you do really well on the putting green?  Beliefs that severely limit your success show up when you “always choke on the back nine”.  Your self-talk can be very revealing about what you truly believe about yourself and your capabilities.  Remember beliefs can be changed.  I’m sure there are things you no longer believe or that you now believe which you once thought were untrue (hello members of the Flat Earth Society?).  As someone who has sat and listened to countless stories clients have shared with me about their perceived shortcomings, I can attest they are very happy when they finally realize that some “truth” they’ve been holding about themselves turns out to be not so true after all! 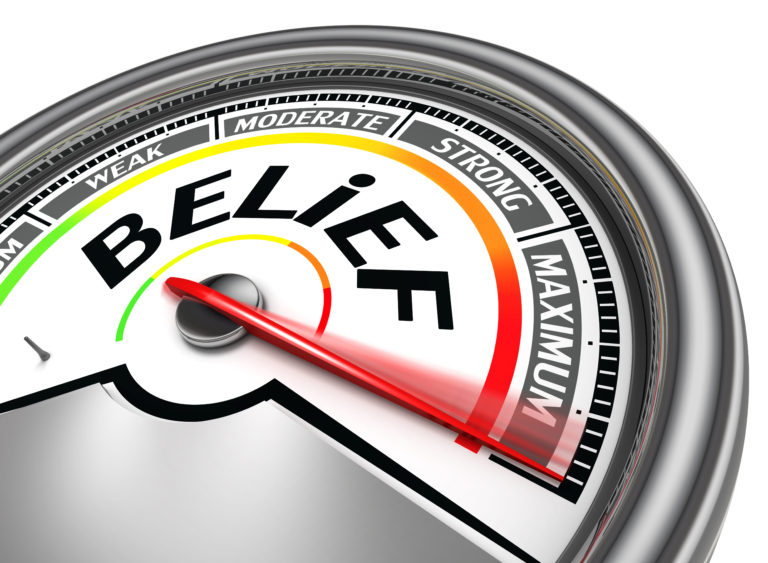